The Affordable Care Act (Obamacare) with emphasis on the Independent Payment Advisory Board (IPAB):  Memo to Subscribers & Followers of www.politicsofhealthcare.com   The hot-button issue in healthcare this week is the Affordable Care Act (ACA), known as Obamacare to some.  Within the text of the ACA is an item known as the Independent Payment Advisory Board (IPAB). The IPAB is the section of the law that will allow unelected appointees to overrule treatment decisions made by our personal physicians. The IPAB is empowered by Sections 3403 and 10320 of the ACA. This writer has found large enough fault with the IPAB to have called for its repeal regardless of whatever fate befalls the rest of the ACA. The fate of the ACA is likely to be decided on November 6th -- President Obama wants to keep the ACA as is, Governor Romney wants to repeal the whole thing. Check out our posts on this topic, e.g., January 18, 2011; June 29, 2012; October 4, 2012; and October 20, 2012 (this last one updated on October 29, 2012). When you check out the posts of 1/18/11, 6/29/12, and 10/20/12 you'll see reprints of my comments in POLITICO. Click on the box to enlarge the print to read the comments. Let me know what you think by commenting directly on-line at www.politicsofhealthcare.com (we do not sell, rent, or share your e-mail addresses with others.  Your comment will be considered for publication unless you ask us not to publish). -- RLW, Ed. 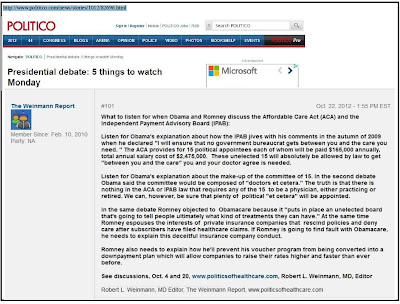 See also our October 4th blog; use the glossary to find more articles about the IPAB, the ACA, and related topics.
Posted by Robert Weinmann at 1:41:00 AM 2 comments:

OBAMA and ROMNEY Debate each other but the loser is The Affordable Care Act.

It appears as though President Obama likes the name, Obamacare, for the Affordable Care Act (ACA). It wouldn't hurt if he understood his own legislation better. On other hand, why should he? He and Congress are exempt from it. Romney simply doesn't need it.

Romney said during the debate of 3 October 2012 that Obamacare "puts in place an unelected board that's going to tell people ultimately what kind of treatments they can have." Romney doesn't like that idea. Except he has incorrectly, some would say on purpose, misconstrued the unelected board,  named  the Independent Payment Advisory Board (IPAB). It will consist of political appointees none of whom need be a physician. Its purpose will be to oversee Medicare costs. The IPAB will have the power to shut down certain costs incurred by Medicare if costs soar out of control and Congress fails to intervene. The IPAB will not be enabled to tell individual physicians what tests to order or what treatment should be used. It will not be allowed to ration care on a patient-by-patient basis. It will not be empowered to raise the Medicare eligibility age or shift costs to retireds. What the IPAB will have will be the power to determine which diagnostic and treatment protocols aren't worth  funding anymore and will in that way ration care for the entire Medicare population, the same as when private insurance companies tell hapless patients that they're seeking what they determined in cloaked boardrooms were actually "non-covered benefits," i.e., you pay for it yourself because this or that benefit is not included in your private health care plan. The IPAB method constitutes a form of sophisticated rationing, but it's not on an individual patient-by-patient basis.

Obama said that the IPAB would be composed of "doctors et cetera." Not necessarily. There's no provision in the ACA that requires doctors to be appointed to the IPAB. Obama himself evidently didn't know that when he made his comment, either that or he sought to hoodwink the audience. The 15 or so appointees to the IPAB will be political appointees who will not need to report directly  to Congress. They will not be elected so they won't represent the public or an electorate. Their job will be to make economic judgments when they decide which diagnostic and treatment protocols will be covered by Medicare and which won't be covered. In short, your doctor can prescribe whatever he wants. But your doctor can't make Medicare pay for it. And neither can you.

The IPAB is empowered by Sections 3403 and 10320 of the ACA.  These sections of the ACA should be repealed. We'll have more to say in due course. So should Obama and Romney. The October 3rd debate showed that both candidates have lots more to learn about the ACA. For instance, they can tell us if it's correct that the members of this board are to be paid $165,000 per year at a total public cost of $2,475,000. Repealing these two sections of the ACA will save taxpayers nearly $2.5 million.

ASSEMBLYMAN JARED HUFFMAN found out too late that his vote in favor of SB 863 helped seal the doom of his own bill, AB 369, which was intended to put an end to the merciless use of "step therapy," the method favored by insurance companies to restrict access of patients to  medications prescribed by their personal physicians.

When Governor Brown signed SB 863 into law, the light went out not only for AB 1687 (Fong) but also for AB 369 (Huffman).  Governor Brown's veto message of AB 1687 said that the bill wasn't necessary because SB 863 was now the law. Both bills passed the legislature on a bipartisan basis, but both bills were vetoed by Gov. Brown. In this piece, we'll discuss AB 369 which this writer supported (see June 2011 issue of www.politicsofhealthcare.com).

"Step therapy" is the process by which patients are required by insurance companies, HMOs, PPOs, or others to try specified generic medications before they're allowed to try better, newer, or more expensive medications that may have actually been prescribed by their treating doctors.  The purpose is cost control even if patients are harmed in the process.

In his veto message for AB 369 Brown acknowledged that "this bill would prohibit a health plan or insurer from requiring a patient to try and 'fail' more than two medications before allowing a patient to have the pain medication prescribed by his or her doctor." In fact, the part about "two medications" was already a compromise, but that wasn't enough for the insurance companies, health plans, or Governor Brown who is seeking their support for other issues.

In the veto message, the Governor used one of the worst aspects of SB 863 to justify his veto decision against AB 369. Here's what he said: "Independent medical reviews are available to resolve differences in clinical judgment when they occur, even on an expedited basis."

Keep in mind that in workers comp the names of the independent medical reviewers are supposed to be kept secret. Keep in mind that in the private plans the decision means that patients will be obliged to rely on medications that their personal physicians had purposefully not prescribed.

Brown said that "any limitations on the practice of  'step-therapy' should better reflect a health plan or insurer's legitimate role in determining the allowable steps." In other words, we're told that the health plan's cost-control panel has a "legitimate role" in overruling the strictly medical decisions of our personal physicians. That's the law that Governor Brown favors. Moreover, had AB 369 become law, it would have run counter to the aims and objectives of SB 863 which puts anonymous and often non-California licensed doctors who have not interviewed or examined the patients in control of properly licensed treating physicians who've actually interviewed and examined the patients.

Starting 1 January 2013, an Independent Medical Review system will replace the current Utilization Review (UR) system. The chief differences are that the IMR doctors will have their names protected and will only be able to be challenged for bias, fraud, or conflict of interest, a challenge that may be difficult to undertake if the the doctors' names are protected. The current system of UR is subject to challenge in court.

Governor Brown's veto of AB 369 is harmful to patients and is favorable to the financial interests of the insurance companies and health plans. IMR doctors and their employers should be subject to challenge in court.  Governor Brown's veto prevents lawyers from using AB 369 to litigate against the restrictive treatment provisions incorporated into SB 863.

Huffman joins Fong in that both legislators cast incompatible votes and helped in the downfall of their own respective bills. The master legislator in this case turns out to be Brown. Wie Schade (too bad).