In response to Politico writer Jennifer Haberkorn's article, "Tom Daschle, Bill Frist join forces on health care reform," here is my comment as to why Section 10320 of the ACA should be repealed. 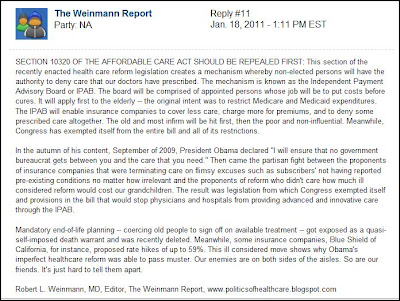 PEER REVIEW: ON A COLLISION COURSE WITH FINANCE, USED TO SILENCE PHYSICIANS, DOCTOR RAO STANDS FIRM AGAINST THE ODDS.

In the Superior Court of California, County of Alameda, a
peer review drama is unfolding. Petitioner R.V. Rao has taken on Washington Township Health Care District, Respondent, re its judicial review committee.

In a nutshell, a conflict is now in about its 8th year. The conflict arose after Dr. Rao questioned administrative proceedings in the hospital and indicated that conflicts of interest may exist between optimal medical care and profitability. Doctor Rao reported his findings to appropriate official agencies. The agencies found fault with the hospital and reportedly told the hospital that Rao had complained. Rao's confidential cover as a whistleblower was blown. This scenario set the stage for on-going conflict. At a judicial review hearing called "JRC1" or "Rao I" Doctor Rao was involuntarily terminated from the Washington Hospital medical staff. Eventually, there was a second peer review proceeding called "JRC2" or "Rao II."

The court document, # HG10540985, refers to the hearing as "JRC2" and "Rao II." Respondent Washington Hospital wanted "to strike portions of the Petition pertaining to the second peer review proceeding." The court document states that "the motion is DENIED."

The document stated that "the motion of Respondent Washington Township Health Care District to strike portions of the Petition of Petitioner R.V. Rao for Writ of Mandamus is DENIED in part and GRANTED in part."

In reference to the 2nd hearing, Washington Hospital sought to "strike portions of the Petition pertaining to the second peer review proceeding." This motion was denied. What is the material that the hospital wanted to strike?

We know that Dr. Rao appeared as a discussant in the movie, Life For Sale, available on DVD and on-line as www.lifeforsalemovie.com.

I am personally on record about this movie, having stated that it "explores dangerous nooks and crannies of healthcare that until now have remained hidden from public view."

Rao appears in the movie as a discussant about peer review. Although he does not mention any hospital by name or present himself as any hospital's spokesperson, his comments have been taken as critical of Washington Hospital. The movie has had public viewing including 13 minutes of the movie shown at a Continuing Medical Education seminar on Sham Peer Review sponsored by the Union of American Physicians and Dentists and the University of California at Irvine.

In general the movie suggests that conflicts of interest may exist between optimal medical care and optimal financial gain. Some critics feel that Rao's participation in this movie solidified opposition against him.

In the meantime, Washington Hospital has made spectacular financial progress despite miserable economic times. The San Jose Mercury News' report by Matthew Artz, 12/27/10, states that the hospital's CEO, Nancy Farber, would get a salary increase from $614,000 per year to $632,000 with total compensation set at about $857,000 ($245,502 in performance bonuses). Washington Township health care district board member Bernard Stewart was quoted as saying "in my opinion it is hard to describe our CEO's performance this year as anything other than outstanding."

Meanwhile, in the Supreme Court of the State of New York, Appellate Division, Second Judicial Department, Anthony Colantonio, respondent, versus Mercy Medical Center, we have language stating that "the defendants were not entitled to immunity under 42 USC 11112 (a)..."

Doctor Colantonio was asked why his hospital was taking him on. Colantonio replied "I spent seven months writing letters about patient care issues that needed to be corrected. This was after two years of complaining verbally. I could no longer look the other way while patients were dying. They found my conduct 'disruptive.' "

Peer Review privacy, for which I personally have testified in the California legislature, is now under the gun and, regrettably, perhaps with good reason if it can be shown that the process is being subverted. The doctors in the Colantonio case are now subject to civil lawsuits since providing false testimony is not protected under the Health Care Quality Improvement Act.

At the same time, doctors who take on hospital administrations or who are felt to be too vigorous in their protests run the risk of being called "disruptive," which in turn can lead to hospital discipline and adverse reports to state medical boards (these reports are known as 805s in California).

In Rao's case, the court is being asked to undertake judicial review in order to overturn the termination order from the Washington Township Health Care District Board of Directors.

My opinion was stated at one of the hearings where I testified at Washington Hospital on behalf of Dr. Rao. I pointed out that had the doctors in Redding spoken out and questioned the administration as well as their own colleagues, the catastophic conduct reported to have occurred there -- including unnecessary operations -- would have been nipped in the bud.

Doctor Rao acted honorably. He should be exonerated and restored to full privileges at Washington Hospital.
Posted by Robert Weinmann at 1:10:00 PM 1 comment: